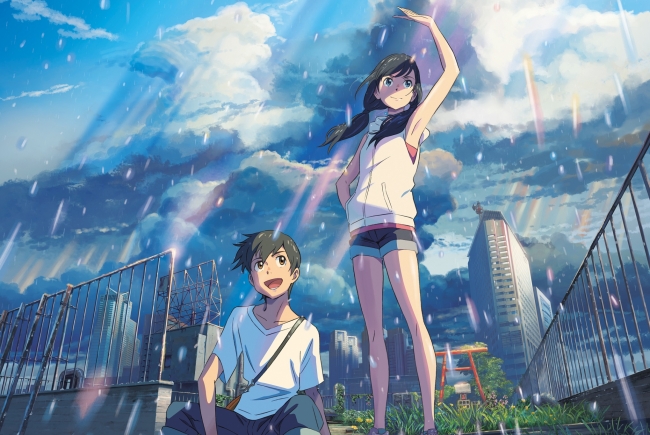 The first English subtitled trailer for Japanese director Makoto Shinkai’s latest film Weathering with You was recently released to Youtube and looks to pull at the heart strings similar to his 2016 hit film, Your Name. The film is currently ranked number 1 in satisfaction based on Japan’s biggest ticket selling site, Pia, who performed surveys with filmgoers in Japan using their app.

Weathering With You follows high school freshman Hodaka, who runs away from his rural home to live in Tokyo. The city with its constant rain seems to reflect his mood as he struggles to adapt and find fulfillment in the city. Eventually, he meets Hina, who has the ability to stop the rain and clear the sky on a street corner.

The film will be produced by CoMix Wave Films, and has a similar appearance and style to Your Name. The film will also feature music from Japanese rock band Radwimps, who created the music for Your Name’s soundtrack. The soundtrack is currently available for streaming in certain countries.

The film is set to have limited theatrical releases in 2019 and 2020, and was released to theaters in Japan on July 19, outperforming Your Name’s theatrical debut in its first weekend.

For markets in Southeast Asia, the movie will be released in Indonesia on August 21, while Vietnam and Singapore will both get the movie on September 12. Thailand seems to have the longest wait where they will have to wait until November 7 to see the film. Some fans in India have started petitions to have the film be shown in India, where as of currently, the film doesn’t have a planned release.